It forms a comprehensive system to keep the dead bodies for funeral homes and crematoriums.

Basis of the system consists in a refrigeration chamber made of sandwich PUR panels sheathed with stainless steel or white lacquered galvanized sheet. The panel connection system allows for easy installation or dismantling as well as possibility of chamber expansion. The chamber is equipped with an insulating revolving door. In the standard (S) version, the dead bodies are placed on three or four levels above each other; in the robust (R) version, the maximum is three levels. The refrigeration unit is designed as a ceiling compact or a separate unit.

The chamber equipment includes a tray bin for the dead bodies and a lifting (positioning) truck intended to transport and store the trays with dead bodies into the chamber bin.

In addition, the production program includes a cooled funeral box with a window in the upper lid. 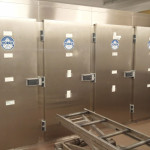 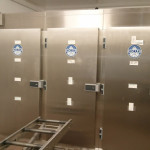